Group Companies Work with us
Claims and Reports

About us Apri il menu

The backbone of the Trans-European Transport Network

The European policy for trans-European transport, energy and networks (TENs) was established in 1993 on the basis of Title XVI, articles 170-172, of the Treaty on the Functioning of the European Union. The TEN-T network aims to create a single European transport area based on a single trans-European network that is complete, integrated and multimodal including land, sea and air transport, which covers and links all EU member states in an intermodal and interoperable manner.

The TEN-T Network facilitates the integration of European countries opening the way to a single market and supports a transport decarbonisation policy and an active role by the EU in the global fight against climate change.

EU Regulation 1315/2013, which defined the trans-European transport network TEN-T, provides for the creation of a network based on two levels for the development of the international network:

The Core Network is the strategic part of the Comprehensive Network.

The Core Network is entrusted with the task of connecting the 27 EU countries, which is essential for achieving the objective of the single market. The Core Network nodes have been defined using a transparent, public method which takes into account objective territorial, demographic and transport criteria.
It must be completed and made fully available by 2030.
In the medium and long term, the improvement to the railway infrastructure will lead to significant growth in the corridors’ rail transport volumes and, at the same time, an increase in capacity through the construction of new links and new infrastructure as well as the technological upgrading of existing lines.
Today, the priority in Europe is to improve the level of interoperability between the trans-border networks by providing appropriate links between the various methods of transport and removing existing bottlenecks at the main urban nodes.

The Core Network consists of:

The Comprehensive Network is less strategic and consists of all the existing and planned transport infrastructure aimed at achieving the territorial cohesion objectives and integrates and interconnects the Core Network. It must be completed and made fully available by 2050. 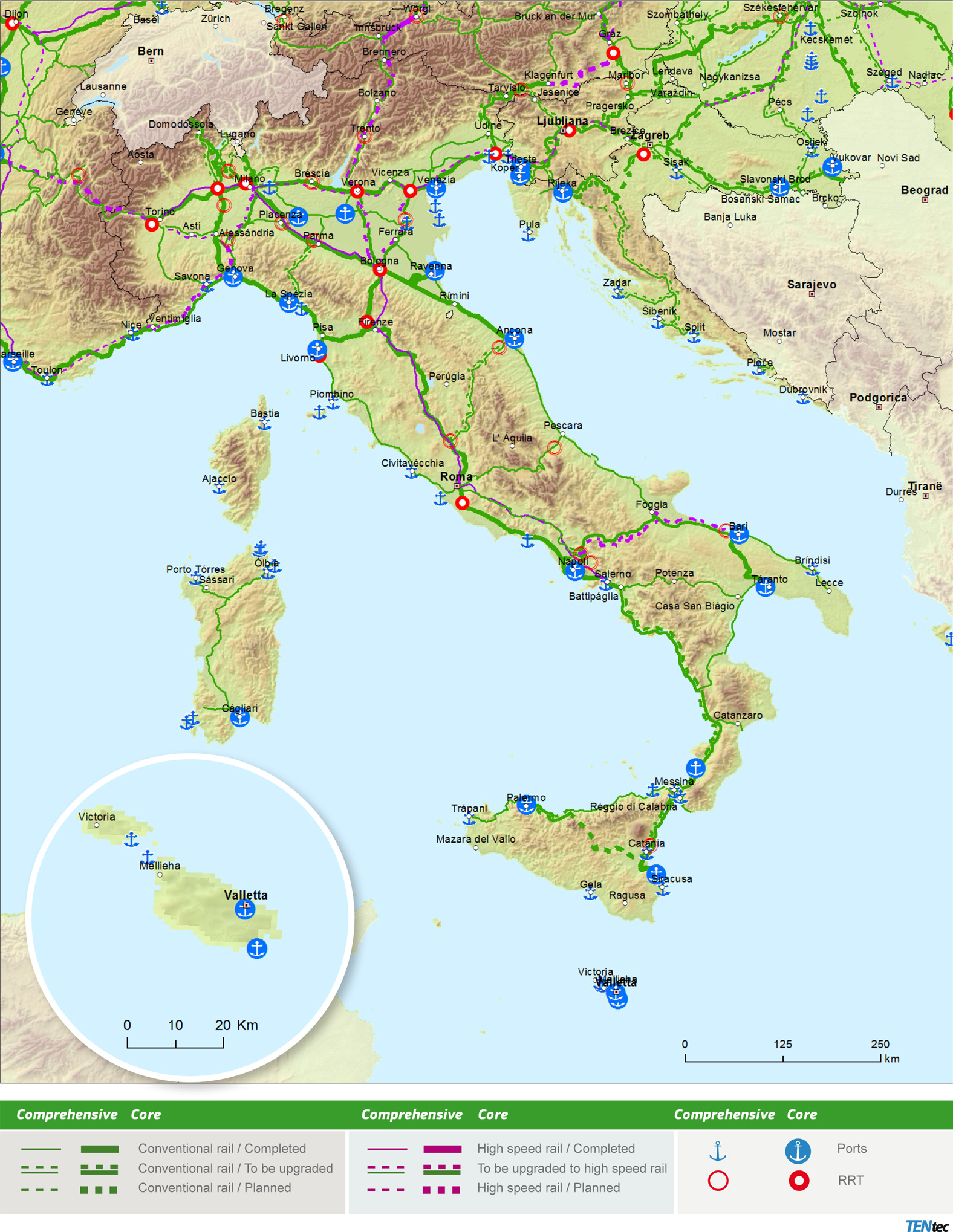 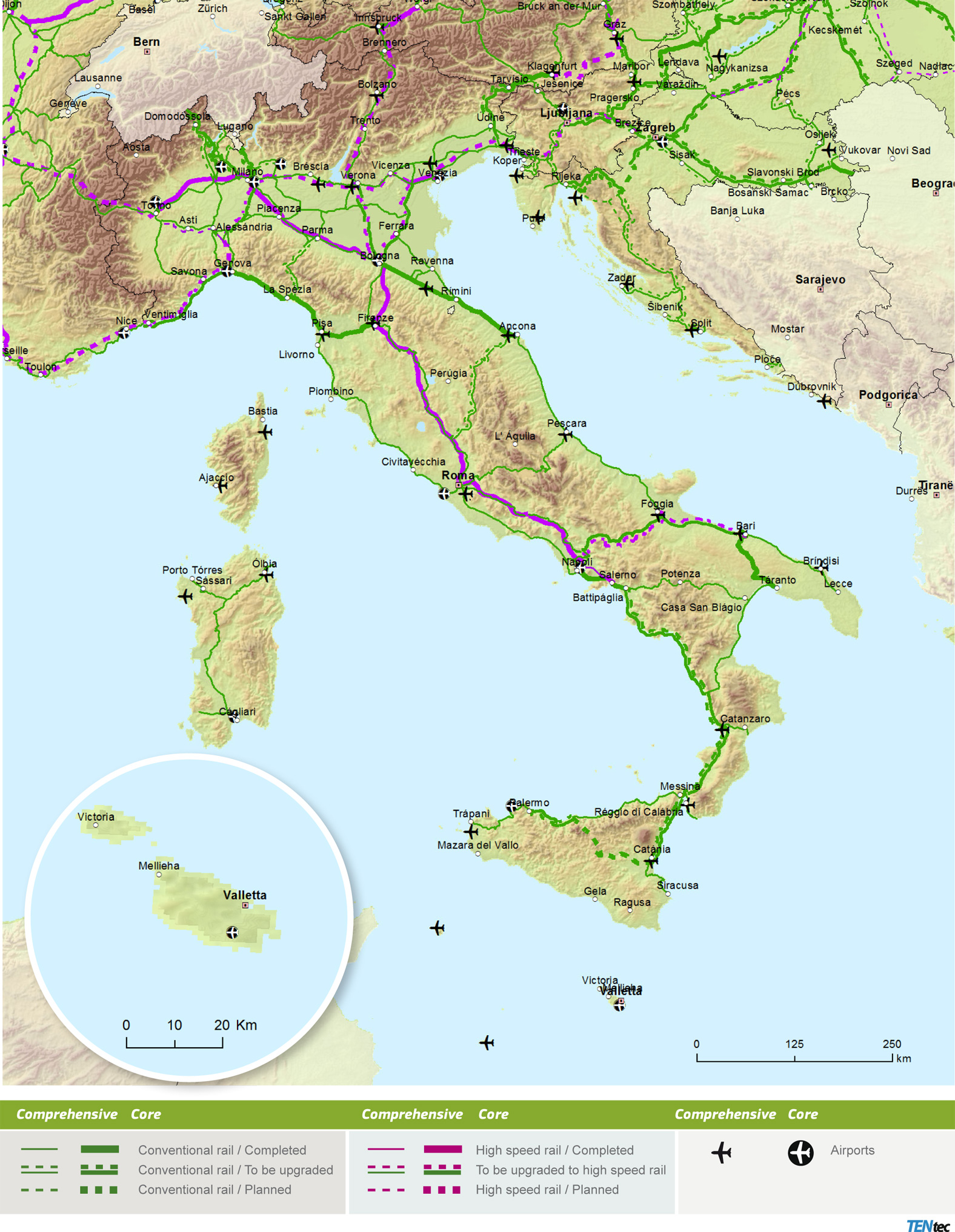 The core corridors of the TEN-T relating to Italy

Through a substantial basket of technological and infrastructural investments aimed at bringing national rail infrastructure in line with TEN-T standards (focusing on eliminating bottlenecks), we are extensively engaged in completing the Core Network, improving interoperability with cross-border networks and creating appropriate “last mile” connections with ports, airports and intermodal terminals in the Core Network.

Italy is in a strategic position as four of the nine corridors of the TEN-T Core Network that are essential for increasing links between the European markets pass through Italy: the Baltic-Adriatic, the Scandinavia-Mediterranean, the Rhine-Alpine and the Mediterranean.

In order to reflect the growing transport flows and the evolution of TEN-T, the EU Regulation 2021/1153 provided for the alignment of the Core Network corridors and the related sections identified in advance. These adjustments concern: 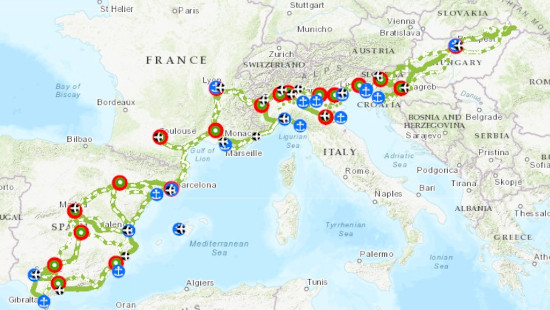 The Mediterranean Corridor links the ports of Algeciras, Cartagena, Valencia, Tarragona and Barcelona in the Iberian Peninsula, with Hungary and the Ukrainian border, the south of France, northern Italy, Slovenia and Croatia. The Corridor has a portfolio of 527 investment projects equal to approximately 98.4 billion euros, 160 of which are monitored in Italy, where rail has 21 projects (Fora November 2019).

Included among the cross-border projects is the new Turin-Lyon line, where the main construction is the new Moncenisio base tunnel and the upgrading of the Trieste-Capodistria-Ljubljana connection which is coordinated by the Trieste-Divača rail EEIG. 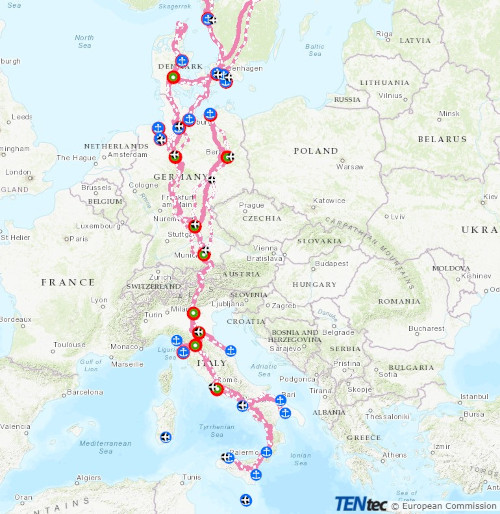 The Scandinavian-Mediterranean Corridor extends from the Russian-Finnish border and from the Finnish ports of HaminaKotka, Helsinki and Turku-Naantali to Stockholm, through a “motorway of the sea", crossing southern Sweden, Denmark, Germany (connections to the ports of Bremen, Hamburg and Rostock), western Austria and Italy (connections to the ports of La Spezia, Livorno, Ancona, Bari, Taranto, Naples and Palermo) to Malta.

The Corridor has a portfolio of 655 investment projects for a total value of approximately EUR 200.2 billion, including 169 which are monitored in Italy and 55 relating to rail transport (Fora November 2019).

Of particular importance is the cross-border Brenner Base Tunnel project, which will run for a length of approximately 55 km between the stations of Franzensfeste (BZ) and Innsbruck (Austria), in addition to the project to upgrade the Brenner-Verona access line, which entails quadrupling certain sections of the historic line - which is currently about 180 km long - from Franzensfeste station to Verona. The overall project will allow for the elimination of bottlenecks on the Brenner route, thereby increasing the capacity for developing traffic on the Scandinavian-Mediterranean Corridor.

Another strategic corridor initiative is the new Naples-Bari HS/HC line project which meets the specific objectives of improving accessibility and connectivity between the European regions, which will help significantly reduce travelling times between Rome and Bari and which will provide an approximately 2-hour direct connection between Naples and Bari. 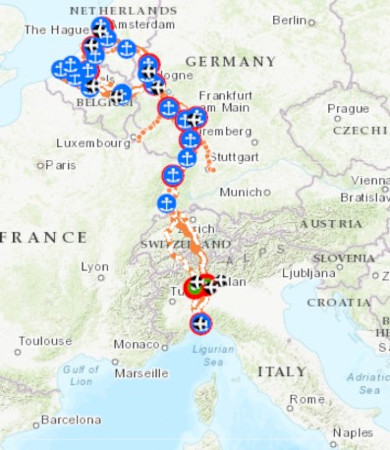 The Rhine-Alpine Corridor links the North Sea ports of Antwerp, Rotterdam and Amsterdam to the Italian port of Genoa crossing the Rhine valley, Basel and Milan. 310 projects have been monitored, 70 relating to Italy and 22 that we promote as RFI (Fora November 2019).

The strategic works taking place in Italy include the Third Giovi Pass project which will help strengthen the Ligurian port system’s links to the main railway lines in northern Italy and the rest of Europe and transfer important shares of road freight traffic to rail, in line with the European objectives for the environmental and social sustainability of transport.

The Baltic-Adriatic Corridor links the ports of the Baltic to those of the Adriatic, crossing Poland, the Czech Repubblic, Slovakia, Austria, Slovenia and Italy. The gateways to Italy are the Tarvisio pass on the border with Austria and the Villa Opicina pass on the border with Slovenia, arriving at the port of Ancona via Udine/Trieste-Venice-Padua and Bologna.

The Corridor has a portfolio of 502 investment projects equal to approximately 71.8 billion euros (Fora November 2019).

Italy is helping improve the European transport network with 110 projects, including 16 rail infrastructure enhancement projects promoted by RFI, both to upgrade lines from a technological standpoint by implementing the ERTMS system and to increase performance with work done on the tracks to allow trains of up to 740 m in length to operate.

Of particular importance is the cross-border project to upgrade the existing railway section between the Trieste urban node (Bivio d'Aurisina) and Divača, with the aim of promoting the development of cross-border traffic between Italy and Slovenia. To this end, the Trieste-Divača railway EEIG was established as coordinator of all the bilateral activities.

Governance of the core corridors and the role of RFI

By Regulation 1315/2013, the Commission defined the organisational structure of each “core” corridor which is lead by a Europe Coordinator, who has the role of directly involving the main stakeholders (Member States, regions, local authorities, etc.) under a single leadership with a view to completing the cross-border sections and developing intermodality and interoperability.

The various activities of the Europe Coordinator include drawing up the “Corridor work plan” in agreement with the Member States concerned and by consulting the Corridor Forum consisting of all the stakeholders.

Our main activity is to assist the EU Coordinator in drawing up the Corridor Work Plan relating to Italy, by updating the infrastructure project list used to evaluate the progress of each corridor in terms of compliance with the parameters established by the EU TEN-T Regulation.

We also actively participate in the Corridor Forums, consultative bodies chaired by the EU Coordinator, which take place twice a year in Brussels and are a opportunity for dialogue with the European Commission, Member States and other stakeholders (local authorities, infrastructure managers, ports, airports, road-rail terminals, operators, users and other interested parties) in relation to the coordinated development of each corridor's investments.

For the TEN-T Network corridors relating to Italy, the European Commission has appointed the following as Europe Coordinators:

Added to your Press kit